Hello . . . and welcome to my genderqueer world!

I've been planning to launch this blog for months now, but never quite knew where to begin. I knew I wanted to create a home for my genderqueer thoughts and expressions . . . a place to share my explorations of the glorious realm between the gender binaries of male and female. I also knew I wanted place to share some snippets of my writing, and to showcase my (soon-to-be) published work.

As I was arranging my new friends upon my desk this morning, it suddenly hit me - why not begin at the beginning? Not literally, of course, but my smile this morning has a lot to do with my earliest memories of being genderqueer, which gives me that perfect reason to post.

Before I get started, however, please allow me to introduce you to Rarity and the Twinkleshine sisters, the proudest & prettiest additions to my unicorn collection (from the My Little Pony universe). 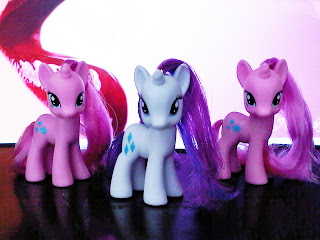 I absolutely love unicorns. I always have. When the other boys at school were playing with dragons and dinosaurs, I was playing with unicorns. There's just something so magical about them, a perfect balance of pretty and powerful that appealed to me on the deepest level - and still does.

There's a common stereotype about transgender children - those who identify with a gender opposite their own - being obsessed with mermaids. Apparently, or so the theory goes, it's because the ambiguous genitalia (nothing below the waist but a tail) is supposedly appealing to a child who isn't comfortable with what's between their own legs. I've never understood that, and certainly never shared the fascination. After all, when I was a child, genitalia was the furthest thing from my mind. Yes, I knew boys and girls were different down there, but that wasn't a visible difference.

There's another (less common) stereotype that genderqueer or androgynous children - those who see themselves as either both genders or neither - are obsessed with unicorns. It doesn't get as much press, probably because it confronts (rather than disguises) sexuality, but the theory there is that it's the visible blending of genders (a female horse with a male phallic symbol upon her head) that is appealing. It's no less awkward a theory than the one about mermaids but, as an adult, I can definitely see and appreciate that attraction.

If I had a dollar for every fantasy that involved being penetrated by a unicorn's horn and magically transformed by the experience, I'd be rich!

All theories and stereotypes aside, however, it was my love for unicorns that first marked me as different. It's the first memory I have of queering away from the gender binary, and one that remains special and precious to me today. Even when I'm in the office, trapped in the masculinity of a suit-and-tie (albeit, softened with the femininity of a woman's blouse beneath the tie, and my long hair and hoop earrings above the collar), I can look at my unicorns, smile, and be reminded of who I am.