If you had ever told me that I’d be reviewing a cookbook, I would have said you were crazy. My genderqueer nature seems to lend itself to culinary extremes, with a slightly chilled glass of red wine and a nice peppercorn steak on the one end, and an ice-cold glass of Dr. Pepper (fountain only, please, and slightly flat) and a plate of chicken wings on the other. There’s a wide gap in between, and I’m just not one to fill it by experimenting with new tastes.

Besides, when a friend dropped Natural Harvest in my lap, I thought it was a joke. I mean, really, a collection of semen-based recipes? The very concept seemed absurd, if it was a joke . . . and unimaginably exciting, if it wasn’t. 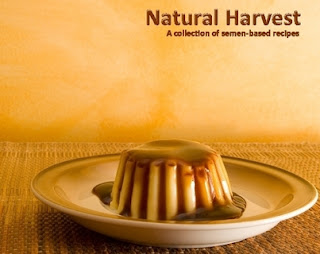 Paul starts off by making a good point – if you look at civilized cultures around the world, we do eat a lot of very odd things on a regular basis. From rotten fish in Sweden, to blood sausage in Great Britain, to bovine mammary secretions (milk) in North America, we don’t even think about what we’re eating. Comparatively speaking, semen is not that unusual, and has the added benefit of being nutritious, cheap to produce, and readily available.

Over the past 2 week’s I’ve tried several of the recipes in the book. Even as a polyamorous lover with an admitted cum-fetish, I was pleasantly surprised to discover how wonderful some of the recipes tasted. For the sake of experimentation, I tried them both with and without the semen, and I can honestly say there was a palatable difference, although the taste was not at all what I expected. In a sense, semen seems a bit like tofu – the taste varies widely by both the donor’s diet, and by the ingredients with which it’s mixed.

As far as Drinks go (Chapter 1), I loved the Almost White Russian and the Irish Coffee with Extra Cream may just become a breakfast staple. In terms of Appetizers (Chapter 2), the Grilled & Glazed Salmon was quite good although I will admit to a few substitutions (haddock for salmon) and a few omissions (soy sauce and mustard). When it comes to the Main Courses (Chapter 3), the Roasted Lamb with Good Gravy was just wonderful, and the Chicken Soup was as much fun to eat as it was to make.

I’ve always joked with my lovers about semen being a nutritious snack, but I was quite surprised to find out just how true that is. If you’re at all sceptical about concept of Natural Harvest, consider this – as Paul points out in the back of the book, semen actually meets the criteria for a low-carb food, complete with a healthy dose of zinc, magnesium, calcium, potassium, and even vitamin B12.

Not only that, but it’s a lot more fun to collect than grocery shopping could ever be!